A drizzly Saturday lunchtime in Red Lion Square. In the park café sits Keir Starmer with Labour party colleagues finishing lunch.  They’re mid-walkabout. There’s a bit of a film star buzz.  The last time HV was this excited was when we saw Boris from a distance at Kings Cross Station inspecting progress of works on the new square in front of the station. But now we’re going interview our new MP.

So, what’s he like?  Courteous, charming, time for everyone who wants a word or two. Our interview is frequently interrupted by people just wanting to say hello… and would he mind having a photo taken.  Our new MP has time for each one, naturally, effortlessly.  He listens carefully, and wants to do something to help.

I have lived in Kentish Town for 15 years and worked in Holborn for 25 years.

HV points out that this is a second term powerful Conservative majority with an opposition party in apparent disarray desperately trying to reassemble some sort of coherent future.  He nods.  He agrees.  Labour needs a definable mission, a purpose and a method for the future.  It’s important that we [Holborn & St Pancras] have our voice heard.  He assures me that he will be a powerful voice for us – a challenge to Government policy for the next five years.

Hmmm. “A powerful voice”.  Sounds a bit like shouting in the face of a storm. Can he really be effective? Really? Look at the current state of the Labour party.

“It’s important to rebuild the Labour party; take time to have a good look at ourselves with objectivity and honesty.  Define the purpose of our vision, question the politics of the future and ask how we do that.  We need to oppose effectively and hold the government to account.”

In 1990 I co-founded Doughty Street Chambers with radical lawyers such as Helena Kennedy QC, Geoffrey Robertson QC and Edward Fitzgerald QC. Our founding principles were the protection of human rights, internationalism, and a commitment to represent those least able to represent themselves.

Surely this Government can and will do whatever they want? One opposition MP isn’t going to make much, if any, difference.  “There is room in Parliament to effect change.  I want to connect with people at a more direct 1:1 level.  Connect actively and deliberately. After I was elected, I said to the team that every month we would spend an entire day leading the [Labour constituency] team out to connect with people – knocking on doors, stopping to talk in the street. Generally meeting people 1 on 1.”

My most public-facing role was as Director of Public Prosecutions and head of the Crown Prosecution Service from 2008 to 2013. In that role I was responsible for practically all public prosecutions in England and Wales, assisted by my 8,000 or so staff.

“What I’ve found as I meet people and at my surgery, is that the single most stand-out issue is housing. It’s an acute issue. Overcrowding with parents and 3 kids in 1 or 2 bed flats, private rents going through the roof. When people want to buy they find prices are too high, when the kids come back from Uni they have to move back in with their parents because they can’t afford housing. There’s also the problem caused by the selling-off of Housing Association properties. We’ve got to hold the government to account. Even ‘affordable rented accommodation’ is not affordable in our area - 80% of market rent is expensive.”

We talk about the whereismyschool campaign for The Holborn School.  Keir says that having a secondary school is as vital for the community as a doctor’s surgery or post office. He’s going to do all he can to help the campaign succeed.

I was elected to represent Holborn & St. Pancras with a majority of 17,048 votes. [53% of the vote, more than double the next highest polling candidate]

HV then asks what people can do to help him to help us. “I want people to contact me.  Come and talk to me.  Come up and say hello, tell me what you think.  I’m also interested if you’ve got ideas or if there’s something you can offer. I want to make space for people to be able to just have a word.  Let’s exchange views and opinions. Let’s get to know each other.”

Holborn & St. Pancras is my community. I want to work on behalf of all the people of our constituency – from Highgate to the Regents Park Estate and from Somers Town to Covent Garden - to ensure a fairer future for everyone.

As the interview finishes and a queue of photo-seeking fans builds up, HV is left with the impression that our new MP has common sense, is not likely to be bullied into doing the wrong thing, and is interested in and accessible to constituents as individuals. The ‘powerful voice’ does seem like spin, but let’s see.  Keir hasn’t been in the job for long enough for any of us to judge him. His words are fine, and let’s assume that his deeds will follow.

HV asks how people should get in touch. “When you see me around stop for a chat [and a photo if you want], or come to my advice surgery.” Keir then opens his Oyster card holder – yes, there is an Oyster card in it – and gives me his House of Commons card.  Here it is.  Use the opportunity to get in touch.  Let our MP know who you are, what you think and what you want him to do for us. 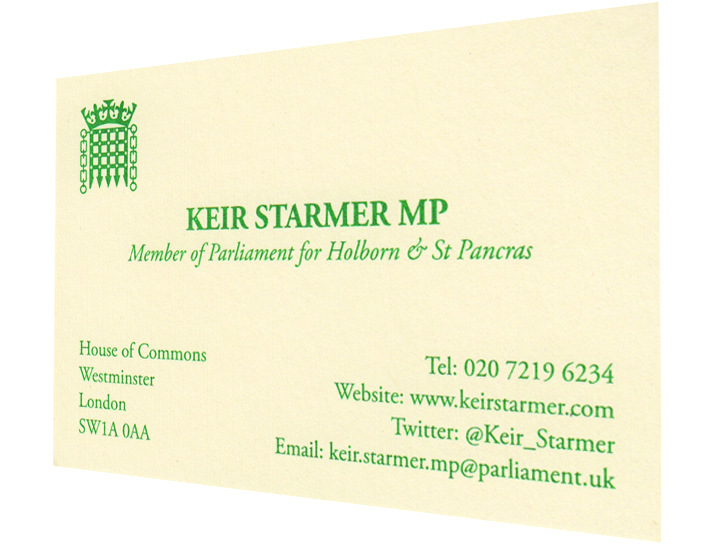 All advice surgeries are first come, first served. More advice dates will be confirmed soon at a variety of venues across the constituency.