A midsummer fair in the heart of Bloomsbury The midsummer edition of this popular festive event takes place on Sunday...
Read More

Friends of St George's Gardens invite you to make a note in your diary for their next event in the...
Read More

The Residents Liaison Group had argued, since the GOSH Childrens Cancer Centre development was first proposed, that to service this five-year destruction and construction process with all vehicles reaching the site via Lamb’s Conduit St and Great Ormond St and leaving via Boswell St was unacceptable and that an alternative should be found.

What is the alternative? A route from the hospitals service yard in Guilford St though to Powis Place could be constructed. GOSH refuse to consider this, saying, without substantiation, that ‘it would not be feasible’ – and yet they have stated that the next stage in their development would be a new access route into the campus which all vehicles would use, from Guilford St. They cannot answer the question ‘why can’t the two developments be swapped, the new route first, the CCC next?’

Why is the current proposal is unacceptable? In general because the plan disregards completely environmental, green, priorities with which we are all very familiar. In particular, it is unacceptable because these narrow roads, already congested, could not accommodate the hundreds of 30 ton/30000kg vehicle movements that would be involved throughout the development. Congestion would become much worse, pedestrians and cyclists would be at much greater risk, air pollution would rocket, and fragile buildings would be put at risk of collapse, and for people living along the route, life would be scarcely tolerable for five years. Further, though GOSH claims to be a positive supporter of the partial or total closure of west Great Ormond St, by using this route they would put the possibility of this happening for at least five years.

What now? In general we want to dispel the view that GOSH as a whole is beyond criticism, and encourage recognition that though clinically it is excellent, one of the world’s foremost paediatric hospitals, managerially it is not a good neighbour. We’re continuing to lobby against the CCC and we’re urging the many people who would be adversely affected by it to object to it formally through the Camden Planning website. Click here for the planning application 2022/2255/P. Objections can be made until 20th June.  Click here for the comments part of the application.

This is the alternative route that would save most of the potential nuisance and disturbance to the community.  It keeps much of the construction traffic within GOSH's own property. 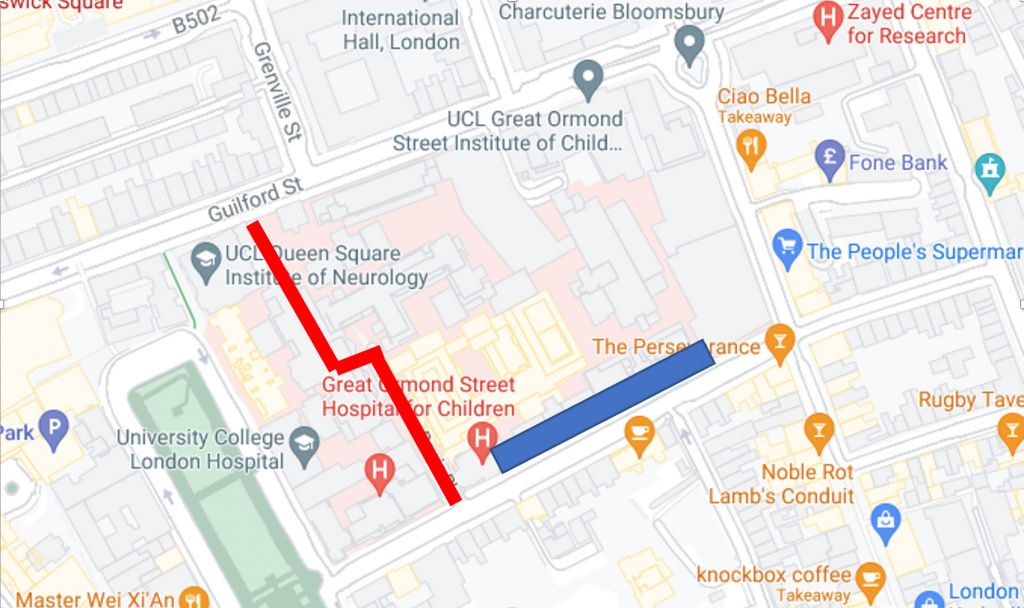 written by Residents and Businesses Liaison Group residentsbusinessliasongroup@gmail.com YOU STILL HAVE TIME TO OBJECT! You can still object to GOSH's planning application to build a vast building, overwhelming Great Ormond Street, blocking daylight to nearby homes and businesses, and increasing traffic congestion...
Read More

Cross posted from Camden Cycling Campaign newsgroup written by John Chamberlain I’m emailing to tell you about a major construction project in Bloomsbury that will have a massive impact on local roads and asking you to object to the planned routing of the construction vehicles. Great Ormond Street Hospital (GOSH) ar...
Read More