Do you like what's happening in Guilford Street opposite Coram's's Fields?  Does the building work and traffic make you feel safe? 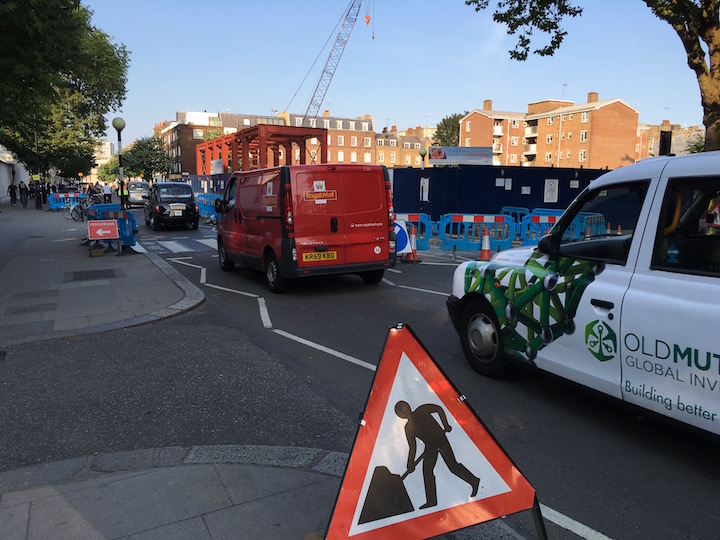 It didn’t really matter that much when the old UCL computer centre was bought by GOSH.  It made a sort of sense - they’re expanding their estate by buying locally. The hospital engaged with us locals, held a number of exhibitions about their plans and obtained planning permission.

The very detailed building plan for the new clinical and research building, by now called ‘Zayed Centre for Research into Rare Disease in Children’, was created by the contractors, Edith, working closely with officers from Camden council.

The building plan insofar as it affects the public realm (that’s the streets and pavements) is very detailed.  You can find the various planning documents here.

It was always planned that the contractor would take over the pavement outside the site and a new Zebra crossing was installed.  Sure it’s slightly inconvenient to have to cross and recross Guilford St when going to/from Lambs Conduit Street, but, really, it’s no biggie.

Then the problems started.

Somebody (or some people) either didn’t notice, or didn’t care that the structures placed on the pavement and road outside the site severely damaged the safety of the Guildford Place to Coram’s Fields Zebra Crossing. Huge metal gantries have been put up with hoardings completely obliterating not only the pavement but, more significantly, part of the road and the mandatory road markings leading to the crossing. Crossing towards Coram’s Fields you can’t see approaching traffic, AND the traffic can’t see you. 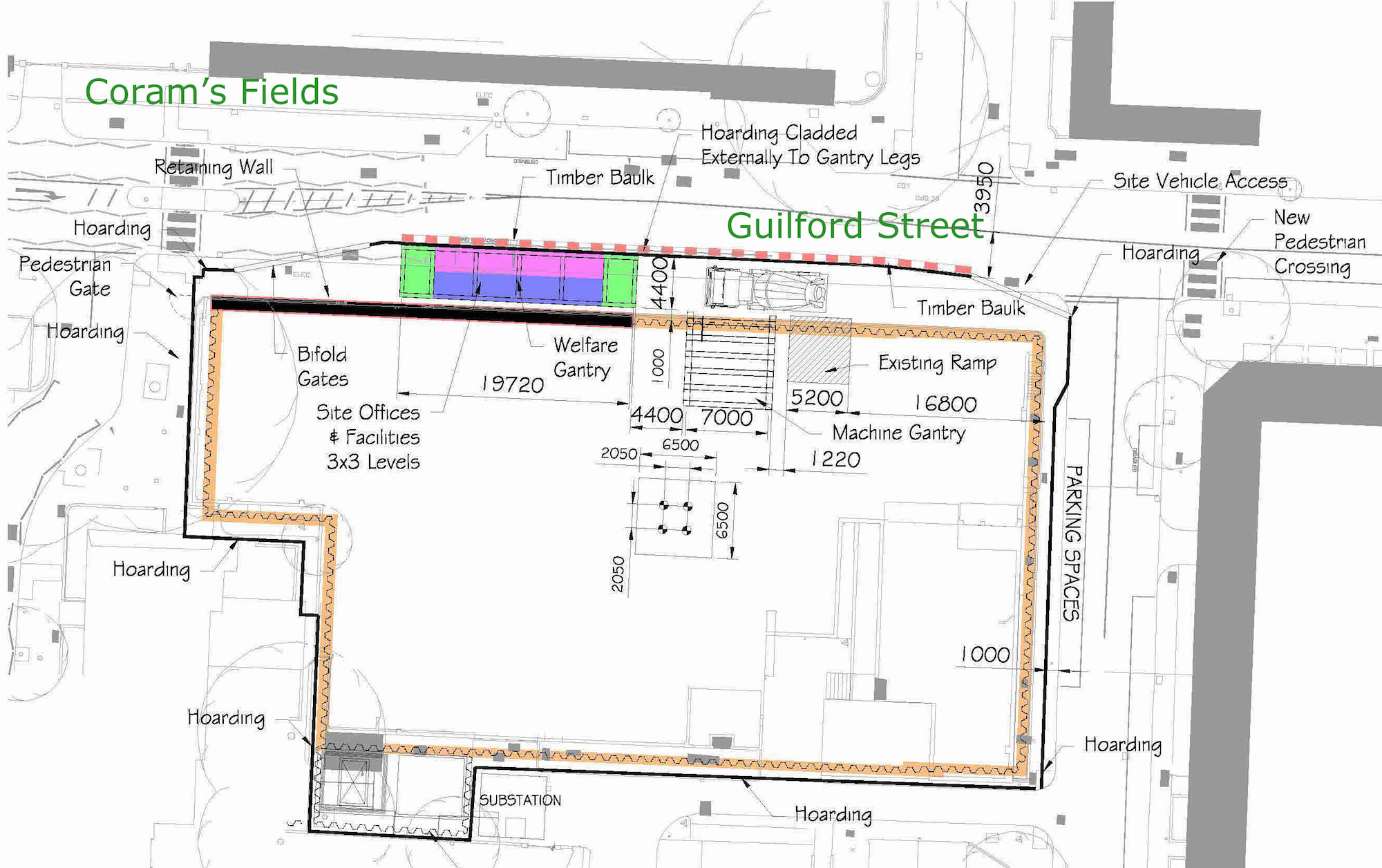 Unsurprisingly the Department for Transport have regulations covering Zebra crossings.  Firstly a minimum clear sightline of 40 meters, and also markings on the road. Both these have been impaired or obliterated.  The crossing IS NOT COMPLIANT with the regulations. That makes it potentially DANGEROUS. That’s why Erith have stationed Traffic Marshals at the crossing. Not one, but FOUR today (Monday 6th June). Even they recognise the danger. So, what are they going to do about it? There's a nice big sign on the site proudly declaring, " Considerate constructors respect the community". Well, that would be a good start. 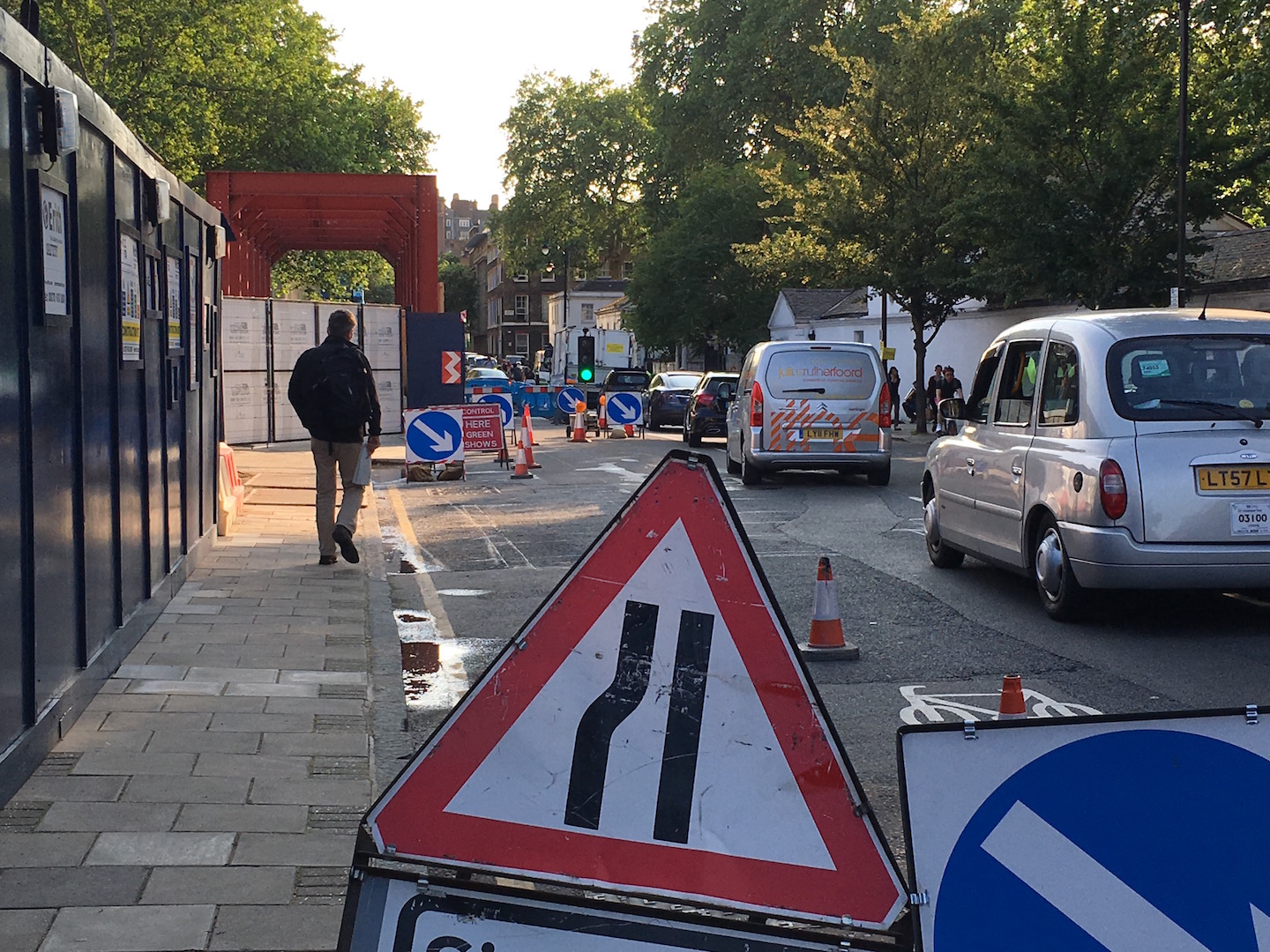 Camden and the contractors got together to cook up a plan. Surprisingly, Camden’s so called ’solution’, instead of telling the contractors to shift their stuff off our crossing and relocate it a bit further down their site, is to remove the pedestrian refuge and narrow Guilford Street by building out the pavement into the road.  Were we asked our opinion about this? Any of us? No. 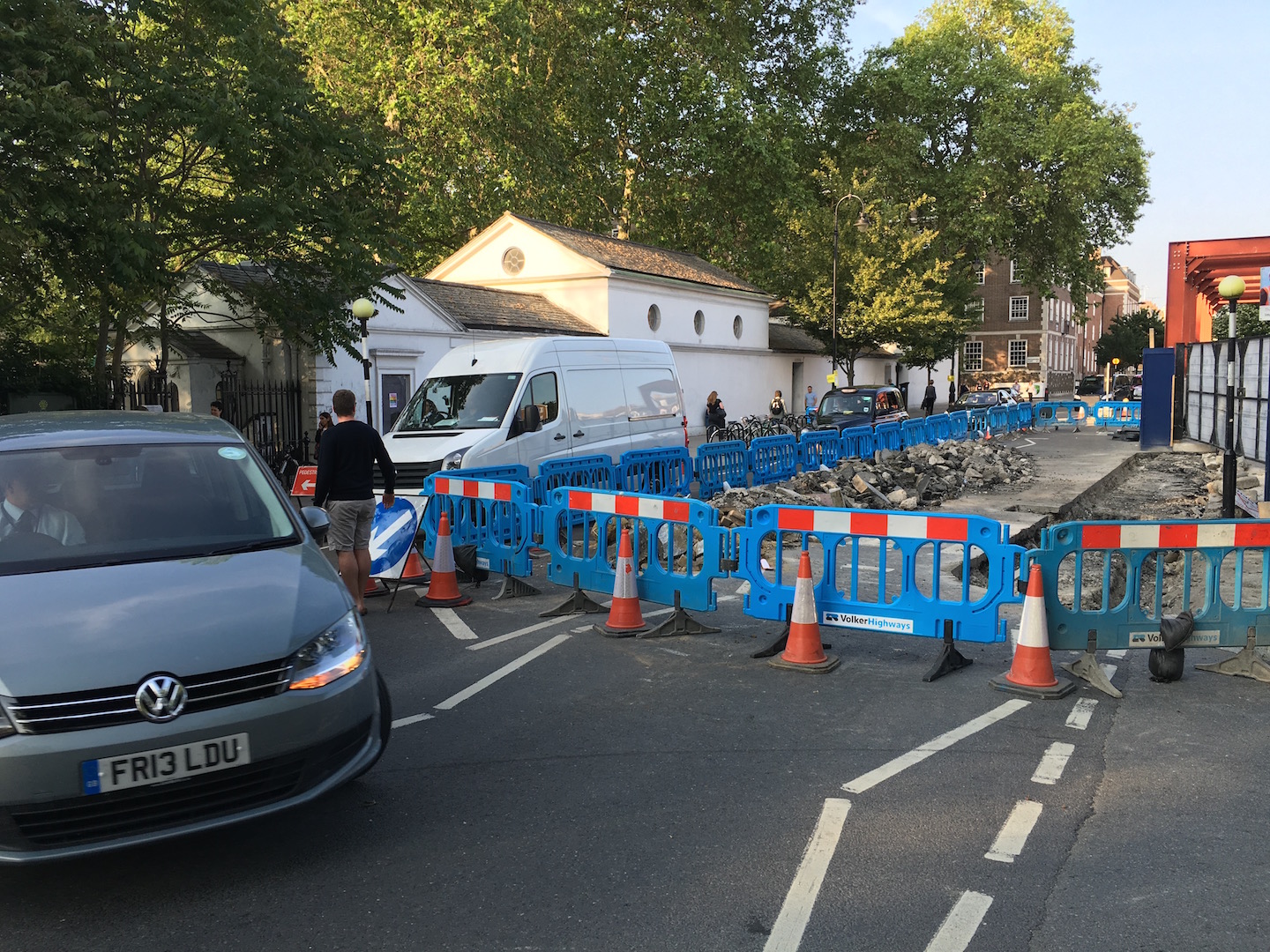 I don’t know about you, but HV sees excited children scampering ahead towards Coram’s on a sunny day. The pedestrian refuge in the middle is a safety necessity. What will narrowing Guilford St do for traffic?  Will it be like the shocking jam we saw this morning (6 June) when the crossing was being dismantled? And, by the way, building is anticipated to continue into 2018. We’re not talking about a few weeks of getting by.

HV and others lobbied for the builders to change the front layout of their site.  It would be ironic that a public safety hazard was created by a children’s hospital on a route to a very popular children’s park.  Another question is, how on earth was this huge safety issue missed? All those clever people who planned the details missed the obstruction of the Zebra Crossing!

On 15th May HV asked Camden for an answer to the simple question, “With these structures placed by the builders, is this crossing fully compliant with the DfT Regulations?”  Did we get an answer?  No!  From their silence I think we can construe the answer - as well as high-handed rudeness towards residents. So where are we now? We’ve been ignored. OI! WAKE UP. WE LIVE HERE.